Our base parish has been so thankful these past two weeks. Last April, our active duty priest assigned to our base retired and we have been without an assigned priest since then. A very kind priest from town has been coming to help fill in, but has to basically fly in, say Mass and then zoom straight back to his parish to make the times work. We were grateful for the gift of the Sacrament, but there wasn’t much time for pastoral care. After much prayer, a civilian priest volunteered to come fill the void and his homilies the past two weeks have been very, very good.

His main point this week was so good, I had to take a minute and share it with you all. He asked us a question at the start: “In all our readings today, there was a man before God. Was he chosen, though unqualified for the work? Or was he qualified, and then chosen?” The answer, of course, is that Isaiah, Paul and Peter were all chosen by God for extraordinary work, but at the time of their calling they were unqualified, unworthy or unclean in some way. They did not have perfect track records (remember Paul’s persecution of the early Christians). They were not holy men (Isaiah said he was a man of unclean lips living among people with unclean lips). They were not righteous men, living ascetic lives in the desert (Peter calls himself a sinful man and works as a lowly fisherman).

What makes these men great is their engagement in their call. Each one was called, and though knowingly unworthy, each responded in some way. Their response is what propels them along the path of grace which God had laid out for them. It changed them, moulded them into individuals uniquely qualified for the role God had called them too.

Isaiah’s lips were purified with the burning coal so that he could be a prophet to a people desperate for God’s presence. Paul credits his complete 180 to the grace working in and through him. Peter hear’s Jesus command to lower the nets and even in his doubt he is obedient. Through that obedience, a catch so large nearly capsized his boat.

What does it mean for you and I? It means that we all have been chosen for some work in this world. It also means that we probably aren’t qualified fully for it. None of us are perfect, we all have places of brokenness, fear, doubt, anger, etc. But those are exactly the places that God wants to work on, to improve, to qualify, so that we can fulfill His mission for us. We are each a unique chosen son and daughter of the Almighty, and nothing can take that away.

I, personally, see this especially in parenthood. These children that have been placed in my lap were chosen for my husband and I to raise. More often than not we feel hugely unqualified for this position. Books upon books upon blogs upon podcasts will try to tell you that you are qualified, that you’ve read all the answers, and it’s just not true. Because your children were not handed to you and your spouse unattached. They belong to God, and He is raising them right along with you. He chose you for them, unqualified though you are. When we lean into the grace He provides we discover the way forward which we couldn’t have found on our own.

So on the days you are feeling less than qualified for the work God has placed at your feet, take comfort and inspiration from Isaiah, Paul and Peter. They may not have been qualified, but they were willing. Are you willing to take the next step into your calling as a chosen son or daughter of the Father?

11 thoughts on “Chosen, not Qualified”

Kate Taliaferro is an Air Force wife, mom of 5 under 9. She enjoys homeschooling, crafting, and reading books one sentence at a time. She has a Masters in Religious Education and tries to find God's presence in all parts of her day, be it cooking, cleaning or just the everyday ordinary. Follow her blog, (link: dailygraces.net) Daily Graces to join her crazy, adventurous, God-filled family.

This month is dedicated to the Holy Family. I’ll be praying this prayer by Pope Francis daily throughout the month. Care to join me?
The dancing egg salad maker! 😂 when did this little girl get so big?
Starting my own shawl design for Rosie and it’s working!! Using handspun from @inglenookfibers LM Montgomery blend. One of Rosie’s favorite authors so it was completely meant for her. I think it’s under-plied, for those spinners out there, but I was too excited to get started to run it through the wheel again.
“Guys! 2 million lights!” Super fun night at @botanicawichita last night!
Merriest of Christmases to you all! Group photo at the end 😊 🎄
Possibly the cutest thing I have made to date! And while at first, I intended this little friend for our home, Eliza so sweetly suggested we give it to our neighbors for Christmas. So a gift he shall be! 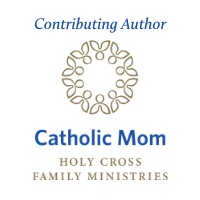